Based on our fun with Skittles Vodka, we decided now was a good time to find out what happens when you infuse vodka with Starburst candies. And so the Starburst Vodka infusion was born.

Turns out it’s something very delicious. It tastes almost exactly like the original Starburst candies you make it from, just with that vodka kick.

You can mix Starburst flavors if you want to. Here, we made each flavor into one flask, just to see the difference with each one. 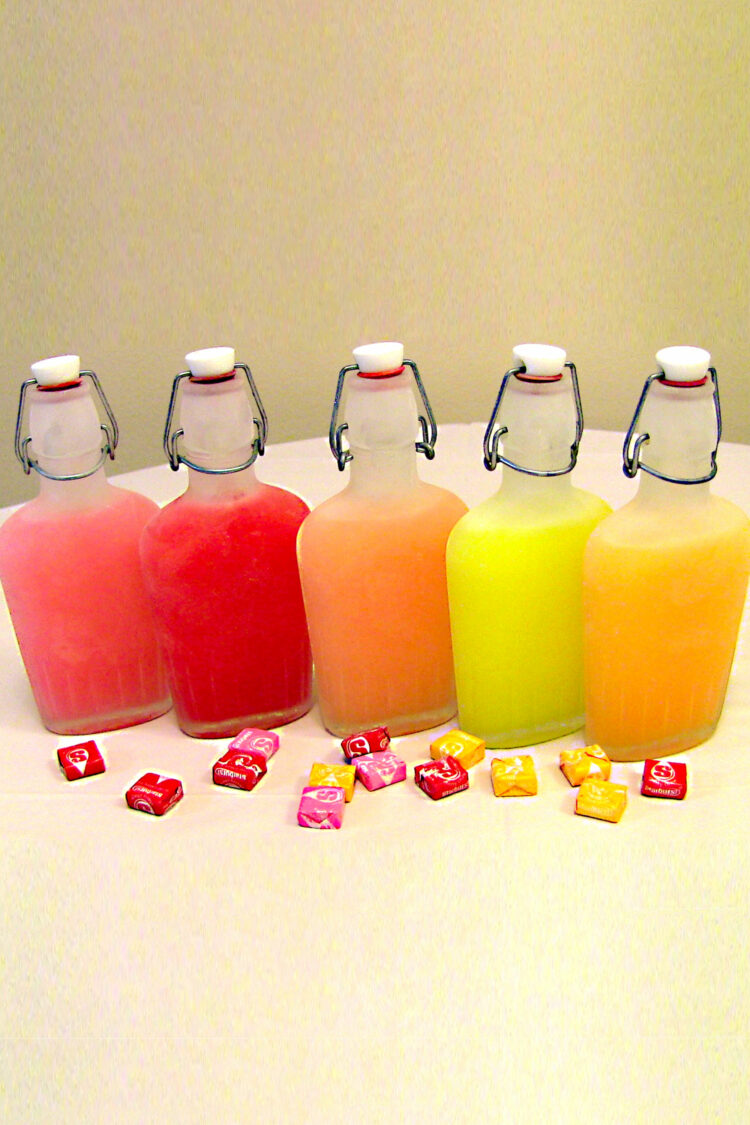 For this project, you’ll need:

As with other infusions we’ve done, you’ll want to have a workspace for things to sit for about twenty-four hours, and you should cover it with newspaper or something because as the sugar breaks down, this can get a little messy.

As I said above, you need about 2.5-3 Starbursts per ounce of vodka. You’ll also want to use an ounce or so less vodka than you want for the finished product, because the Starbursts are going to fill up the bottle a little bit, too.

I wanted to make 5 batches at 8 ounces each, so for each batch, I infused 7 ounces of vodka with 18 candies. That yielded an (approximate) 8-ounce batch in each flavor.

Step 2: put the Starbursts into the water bottles

Take the amount of Starbursts you need for each batch and put them into one of your empty water bottles.

This is my orange batch, with the candies in the bottle. Want to make a mixed flavor batch? Just put Starbursts of different colors in the same bottle.

I did a simple strawberry lemon batch, with 9 strawberry candies and 9 lemon ones. But you can mix all four colors, or use more of one flavor than another – whatever you want.

The vodka doesn’t alter the flavor of the candies at all, so it’s going to taste the same as if you ate two (or more) Starbursts together.

Now you have the beginnings of an infusion:

Give each batch a good shake to get the process started. Shaking helps the vodka get all over the candy and start to break it down faster.

Now your infusion will look something like this, as the vodka takes on the color from the candies and the whole infusion becomes a little more frothy.

I recommend shaking several times, or as often as possible. I had these batches infusing in my dining area, so every time I walked past them, I would give each infusion a good ten seconds or so of shaking.

I started my batches one afternoon: by evening, the Starbursts were getting much smaller, and a white froth was forming on top.

I started my batches one afternoon. The next morning, the Starbursts were completely broken down and the infusions were ready to be strained.

Why strain? Because that white froth on top doesn’t taste great, and it’s going to keep separating from the rest of the drink and looking strange. It’s the waxes or whatever additives they use in the candy, not the yummy tasting bits. But there’s good news: this one is much easier to strain than Skittles Vodka!

Put a single coffee filter in a sieve and put the sieve over your measuring cup. Pour one of your infusions into it and let it run through the filter.

Once it’s done running through, it’ll look like nothing but frothy stuff in the filter:

That’s it! I did not find filtering it through a second coffee filter got out anymore gunk – there will always be a trace of the frothy stuff left behind, but not enough to affect the flavor or look nasty.

Step 6: Pouring into the flasks

Now it’s time to pour your infusions into their glass storage containers. I used my Bormioli Rocco flasks, but as I mentioned above, any glass container that closes up well will do. Just put the funnel into the mouth of your bottle (if necessary) and pour from the measuring cup into the bottle.

From left to right: strawberry, cherry, strawberry-lemon, lemon and orange

Chilling is optional, but I believe vodka always tastes better chilled, and even more when it’s been infused. Just put them in the freezer for a couple of hours (it also looks beautiful when you get them out):

As I mentioned above, they taste exactly like the candy, just with a little bit of that vodka kick. You can definitely drink them straight up – in fact, they’re a little more mellow than the Skittles Vodka, so this is a good way to go.

The lemon was my least favorite, but then it was always my least favorite Starburst flavor – it reminds me of furniture polish. The strawberry-lemon was very good, on the other hand. Strawberry was probably my favorite – but again, it was always my favorite candy flavor. I think you’re probably going to like the infusions exactly as much as you like the candies you made them with. The vodka really doesn’t change anything about the flavor. 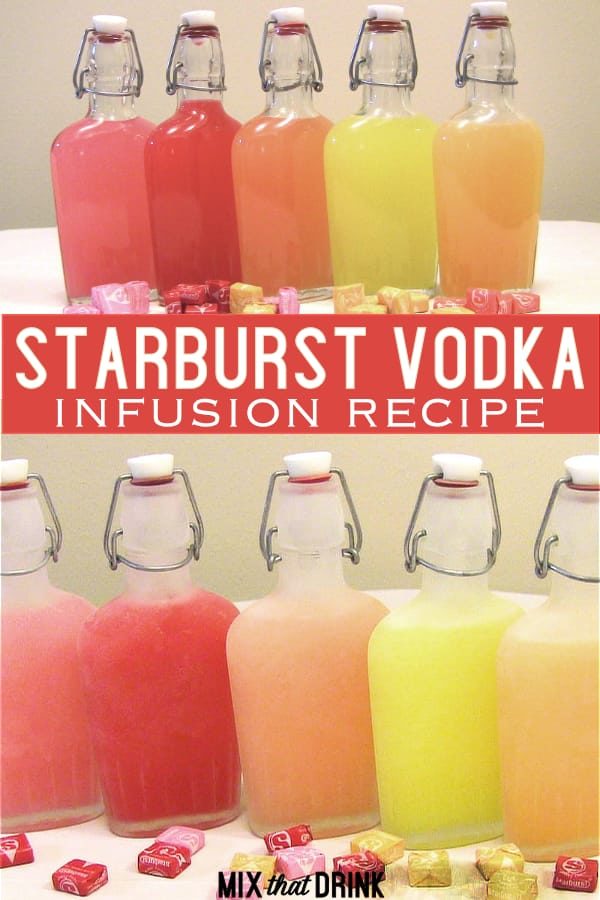