The Key Lime Martini is just what it sounds like: a candy ‘tini that tastes like key lime pie. This is one seriously delicious cocktail, and it’s all about the flavor.

Key lime is a transporting flavor that takes you away to the tropics the instant your tastebuds start to analyze it. The lime is nice and sharp, but this drink is also sweet and creamy.

Like the pie, the Key Lime Martini keeps you coming back for another taste, because you just can’t stop enjoying the strangeness of a flavor that’s equal parts tart and mellow and sweet.

This drink has two ounces of vanilla vodka, and at first that sounds like too much. Key lime pie doesn’t have a strong vanilla taste at all.

But vanilla vodka isn’t all that intense. And it turns out a lot of the other ingredients – especially the key lime juice –  are very tart, so you actually need that flavor to balance things out. It’s what makes it taste like the pie, adding a rich vanilla flavor.

The vanilla contrasts nicely with the tart lime and acidic pineapple juice. And that’s another ingredient that might surprise you. Pineapple juice may not sound like it belongs in a Key Lime Martini, either.

But you don’t get a pineapple flavor from it. It just enhances the lime and makes it a little bit sweeter. There are actually versions of this recipe that don’t include pineapple juice, but it brings some nice notes to the taste.

There’s also a small amount of coconut cream, but it’s in such a small quantity that it doesn’t add much coconut flavor. It just enhances the other flavors and thickens the drink.

And then there’s the heavy cream, which adds creaminess. It’s just an ounce, which is all you need to mellow the other flavors, bring it all together and give it some of the rich texture of the pie.

Naturally, the Key Lime Martini makes a great dessert drink. It’s also terrific served big batch style at parties because you can mix it up in a pitcher ahead of time.

Rim the glasses ahead of time, and you’ve got a very easy drink to serve to guests. If you haven’t rimmed glasses before or want to brush up on your technique, check out my tutorial on how to rim a glass. The rim might sound challenging, but it’s really not. This drink is easy to make, even for novice bartenders.

Be sure to use lime juice (rather than water) to rim the glass. It’ll hold the graham cracker crumbs on much better. And besides, it goes so well with the drink. Just run a lime wedge along the edge of the glass.

Getting hold of key limes isn’t always easy. Sometimes they’re in grocery stores, so you can just buy a few and juice them yourself. That’s the ideal way to make this drink.

But they’re often not available, especially in cooler regions. So you can also buy quality key lime juice online, which is great for when it’s off-season or you just want the convenience of having something that’s already in a bottle.

As for the cream: if you live outside the US, you may not have a product called “heavy cream”. It’s equivalent to double cream. In this recipe, “thickened cream” would work, too.

Basically, you want a cream that’s around 30-36% fat. Anything in that range will work. You just want enough fat in it to add some thickness to the texture of the drink and some creamy flavor.

I’ve noted in the recipe that you can use regular lime juice in a pinch. It makes a small difference in flavor, but it’s still wonderful.

What I would not recommend is using a sweetened lime juice from a bottle. There are enough sweet ingredients in this cocktail already.

If you enjoy this one, check out the Mango Key Lime Margarita, which is a frozen margarita made with key lime juice and pureed mango. On that one, you rim the glass with chili pepper or salt.

The Key Lime Martini tastes a lot like a Key Lime Pie. It features vanilla vodka, Coco Lopez, Pineapple juice, cream and graham cracker crumbs on the rim of the glass. 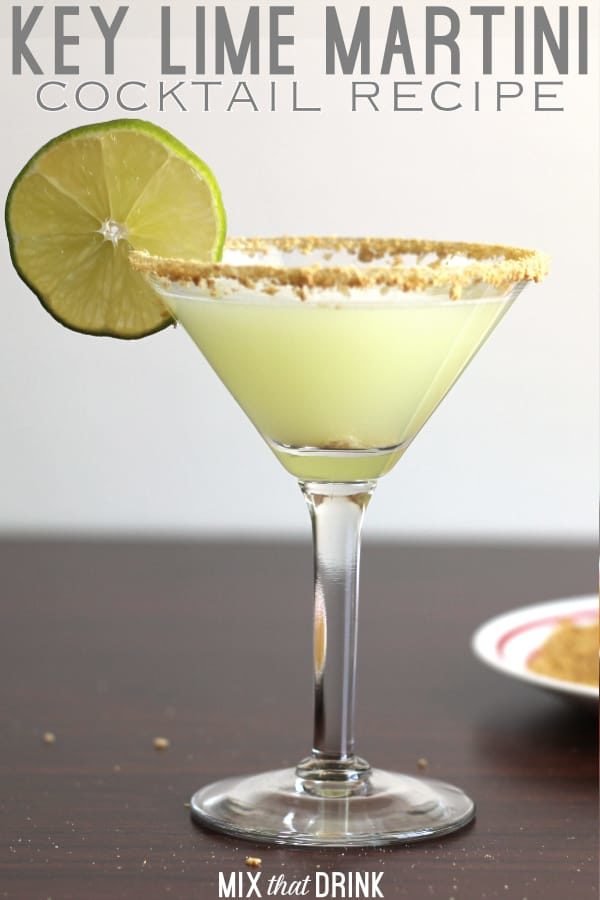