When I embarked on making the perfect green beer for St. Patrick’s Day, I decided no fooling around: I captured a leprechaun and asked it for the recipe. At first, of course, it refused to tell me.

It even offered to take me to its pot of gold instead, but I knew that was a trick. Then it started feeding me a spiel about squeezing shamrock juice into the beer, but I didn’t buy that, either.

I resorted to tickle torture, and finally the leprechaun admitted the truth: they use food coloring, just like everyone else. Huge disappointment, I know!

And yet how cool is it that you, too, can make festive green beer with nothing more than a trip to the grocery store and a few minutes’ time? (And if you’re totally put off the green beer, there are always St. Patrick’s Day cocktails to enjoy instead.) 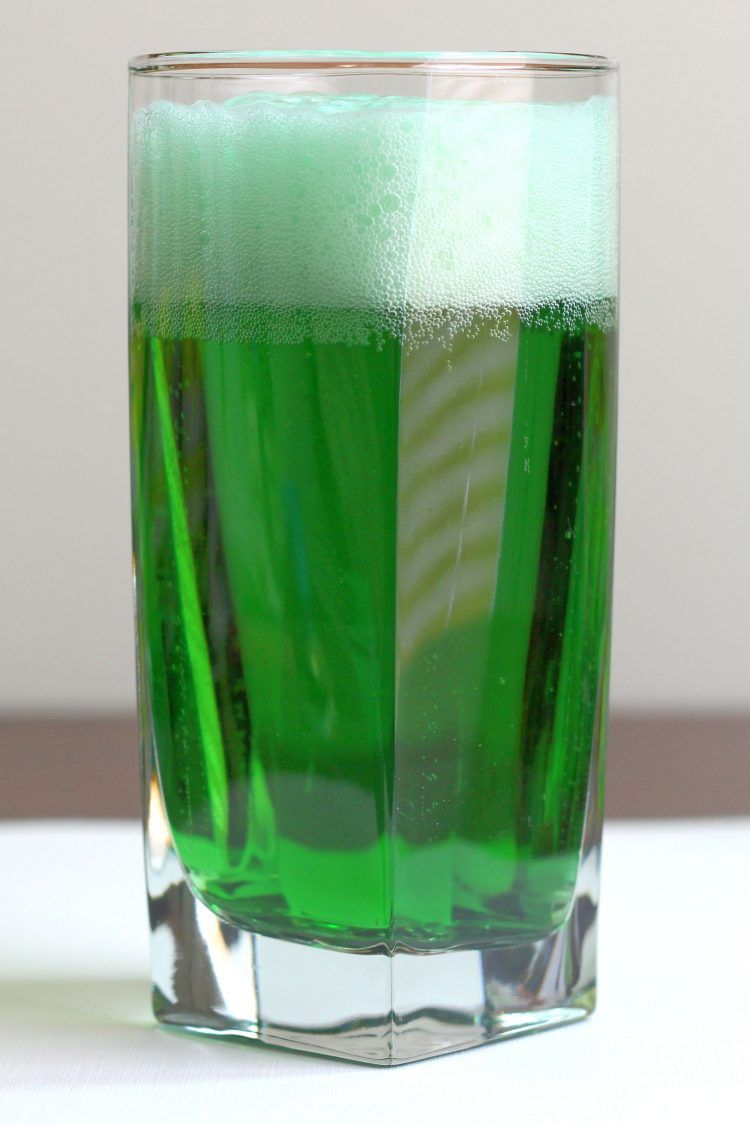 The leprechaun didn’t tell me which color food coloring works best, so I had to test both blue and green. Below are the results.

To play along at home, all you need is beer, a clear glass or mug, a spoon or stirring device of some sort, and plain old liquid food coloring – not a paste, just the kind that comes in a little dropper vial. Choose a pale beer – I went with Harp, a pale Irish lager. If you’re not of Irish descent, you may use a non-Irish beer if you must, but for goodness’ sake, don’t brag about it around St. Patrick’s Day.

Step 1: Add the food coloring to the glass

You can pour the beer first and then add the food coloring, but it gets stuck in the foam and you have to stir it in and it never really looks nice. Now, when I was first testing different amounts of different colors, I had to add the food coloring after the initial pour, but I recommend doing it the other way. You’ll have to read the rest of the article and look at the pictures to decide which color food coloring, and how many drops, you want to use. I went with three green drops of food coloring.

Pour the beer into your glass, over the drop(s) of food coloring, and it will mostly stir up on its own as you pour. If it needs a little more stirring, you can use a bar stir stick, which will agitate the foam so you don’t lose the head. (Stirring with a spoon tends to make the foam disappear, but in a pinch a knife, chopsticks, straw or anything that’s straight should work.)

And that’s it. And now for the pictures that will show you the different experiments I did to find the color I liked best. I started with two glasses of Harp Lager, which is a light amber color. Results may vary depending on the beer you use, so I included this photo for you to compare with your beer.

Next comes the food coloring. When I first did this years ago, I found that the decision was between green and blue food coloring. The amber of the beer gives the drink a yellow hue to begin with. Blue + yellow looked exactly like the green, and green + blue was barely distinguishable from blue or green. Your mileage may vary, but for me, the question was, “Green or blue, and how many drops?”

These are the beers with one drop of green (left) and one drop of blue (right). They look a lot alike at this point, and it’s more olive than the emerald green you want for a St. Patrick’s Day beer.

Then I added another drop to each one.

This is where I would stop if I had gone with the blue. It’s becoming dark and murky looking already. The green still looks good, but has a slight yellow tinge that’s still not quite what I’m after. So I added a third drop to each.

At this point, the blue is just too dark in my opinion, but the green has the beautiful, deep emerald shade I was after. Here are pictures of both glasses from different angles, with a totally white background.

And scroll back up to the pictures of the final product to see how much better it looks when you add the food coloring before the beer.

Photography notes: The only thing I did to touch up photos was brighten them all the same amount and crop them. Because they’re taken from different angles, it’s still possible the colors aren’t exact, but I did my best to make them look exactly like they did to my naked eye.